As a regular person with limited knowledge of the cinematic world, finding thoughtful gifts for film students can be quite a difficult task. What do you get them anyways, another Pulp Fiction Blu-ray? FilmToolKit has done a lot of research to curate this list of the 8 best gifts for filmmakers in training. We’re going to give you a wide variety of options so that no matter what your budget is, and what they already have, you’ll have a bunch of great choices. 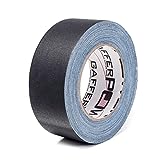 This is the most affordable item on our list, so we’re putting it first. If you’re a non-filmmaker you probably have no idea what Gaff tape is. You know how duct tape is super strong and has a million different uses? Well Gaffer’s tape is basically duct tape that won’t rip up the walls and floors, is tear-able, and stays sticky. It’s used in every single department of the film industry and you can usually find dozens of rolls on any given film set.

Our favorite brand is GafferPower, an industry favorite. This stuff is great for securing wires, hanging signs, marking positions, and a million other things. Most film students don’t realize they need this one until they’ve already caused hundreds of dollars of damage to the location and equipment, so getting them some of this ASAP is a great idea.

One of the biggest problems that plagues student films is shaky footage. Most newbies don’t know how to properly hold a camera, or have yet to buy a tripod. Sending them a stabilization device like a Glidecam, shoulder rig, or tripod is a great way to boost the quality of their films in ways they didn’t even imagine.

The most simple stabilization product that most of you probably already know about is of course, the tripod. Now, keep in mind, these are very common among filmmakers, so you’ll need to do a bit of snooping to find out if the filmmaker already has one.

If they don’t, this tripod from Manfrotto earned our recommendation as the best tripod under $100 in our recent guide. This option is lightweight, compact, relatively cheap and extremely high quality. The fluid motion head is intended for video production, and will allow film students to get the panning and tilting shots that have likely been absent from their films prior.

A small-yet-mighty tripod like this is the perfect gift for film students that are just getting started and building their arsenal of gear. It even comes with a nice carrying bag for easy transportation! 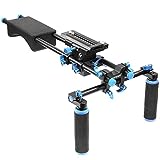 Shoulder rigs are very important tools for stabilizing handheld shots. In our experience, tripods are usually one of the first things students buy, and many aren’t even aware of the existence of shoulder rigs. If you are tired of getting nauseous from your recipient’s shaky handheld footage, a shoulder rig is the perfect gift.

The Neewer Portable Filmmaker System was our choice for the most affordable shoulder rig in our shoulder rig buyer’s guide. It’s very reasonably priced, lightweight, and very versatile – the perfect fit for a film student.

It’s made of high quality metal, has a proper shoulder pad, and is quite sturdy despite the cheap price tag. It’s not a high-end product by any means, but it does an excellent job at stabilizing mid-range cameras, and will make the perfect gift for the film students in your life.

Over the course of all our reviews, Neewer has proved themselves to be an A grade contender in the world of low to mid range filmmaking equipment. Their shoulder rig is no different, and we consider it to be the best option for those of you who are on a budget. Designed specifically for smaller cameras like DSLRs, this rig is very lightweight and versatile. This is a bare bones rig at a very affordable price, and we think that’s a good thing!

Note: If you’re willing to splurge a little more, Neewer sells better equipped models with tools like counter weights, focus wheels and matte boxes to improve their footage even further. 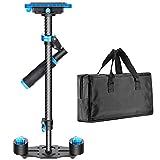 Glidecams are magical little products that use a counterweight system in order to make your shots incredibly smooth, even while walking around. They’re typically pretty expensive devices, but this model from Neewer is very impressive in terms of value. This is the perfect gift for film majors, as they are much less common than tripods and even shoulder rigs.

It’s designed for DSLRs between 2-6 pounds, and is very rigid and sturdy considering the fact that it costs less than $70. It comes with great features like a quick release plate, and the small size means that it’s compatible with cell phones and GoPros – devices that are very widely used among amateur film students.

There are some glidecams that are a bit cheaper, but this one has the most consistent reviews of all small-budget Glidecams. Other cheap models are prone to defects or breaking easily, and you probably don’t want to look cheap.

Straight out of film school, the first entry level film job most film students will encounter is that of a production assistant. You probably have no idea what that entails, but you should know that it’s a job that requires a lot of gear to do right – gear that a major film production is not going to provide for free.

Many film students may not even be aware that they’ll need to gear up before heading into the field, so surprising them with something really useful is sure to score you some points.

Our favorite suggestions from our list include Walkie Headsets, Waterproof shoes, and Tactical pouches to store things like cell phones and call sheets.

Check out the full list to see all of the best P.A. gear recommendations!

No, not an iPad, silly. A drawing tablet. Most filmmakers are also artists, and having the proper tools to express their creativity is very important. In our experience, a shockingly low percentage of film students actually have drawing tablets, giving you the great opportunity to be the provider.

Besides, between storyboards, film posters and concept art, film students will likely have to do a whole bunch of drawing anyways. Many film students even wind up taking an animation class or two at some point! 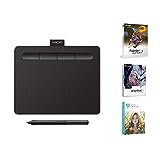 We recommend something simple and cheap like the Wacom Intuos SM art tablet. It brings the unrivaled quality of Wacom in a more affordable package, and is very portable – perfect for the student lifestyle. Wacom is the gold standard for drawing tablets used by animator and illustrator professionals all around the world, and, like many items on this list, can be a lot more beneficial than you might expect.

First off, when I was a college student, I would have killed for someone to come in and offer to pay for some of my books. I hated watching my own money vanish for books I would only need for a few months. If you’re able to figure out their class books before they get them and purchase them, you’ll look very thoughtful.

We’ve compiled the most complete list of filmmaking books ever created, with dozens of excellent choices from every different aspect of the filmmaking process.

Some of our favorite picks for film students are Rebel Without A Crew by Robert Rodriguez and Creativity Inc. by Ed Catmull. These two books are excellent tools to inspire creativity and motivate you as a filmmaker, rather than teach you a bunch of techniques and practices that you’d be learning already in film school.

Screenwriting is a class that just about every film major will end up taking at one point or another, and along with that comes the need for proper screenwriting software.

While many kids opt to use a free software like Celtx, there are many limitations, and it leaves a lot to be desired. If they have any plans to continue writing professionally after school, they’re eventually going to need to invest in the proper industry standard.

If you have any experience with screenwriting, you know that the industry standard is of course, Final Draft. Used by pretty much everyone in the industry from James Cameron to JJ Abrams, final draft is an absolute requirement for anyone pursuing a career in screenwriting. If you’re willing to spend a little bit more on your gift, this is what you should be considering. 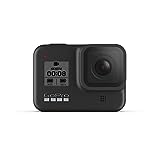 You were never going to splurge on a full fledged DSLR, but a GoPro is an excellent piece of any filmmaking arsenal that will always get a good amount of mileage. These action cams are able to take student films to tons of new places, giving them options for great POV or underwater shots.

Major Hollywood TV shows use GoPros all the time to get extra angles of stunts or explosions where they need a cheap camera that’s going to be destroyed by the blast – so the quality is definitely good enough for any student film.

For a quick, affordable gift, we recommend the GoPro Hero8 Black. It’s the best GoPro on the market and is universally loved by tons of vloggers and content creators.

It should be no surprise that film students watch a lot of movies. If our other suggestions are too far on the expensive side to be a viable gift, movie tickets are a great way to show some thoughtfulness. In our experience, many film students go to the cinemas at least once a week, so unlike an itunes gift card, one of these is sure to not go to waste.

Alright, everyone owns a pair of headphones nowadays, but most people, especially film students, have yet to purchase a proper pair of video editing headphones. That means headphones that are engineered to give you the most accurate representation of the sound – you don’t want to be mixing with some bass-boosting Dr Dre cans if you want your film’s audio to come out nicely. We recently took a look at the top 5 best video editing headphones on the market, so we can give you some solid advice.

We recommend a pair of Audio-Technicas, namely the ATH-M50x or M30x, depending on what price range you’re shopping in. Both are excellent values with wide frequency response ranges, crispness and fidelity. They feature no artificial bass or treble boosting, and are very comfortable. They’re great for listening to music too!

In recent years, Adobe Premiere has grown to the point of ubiquity in the film industry. While large feature films and TV shows still use Avid Media Composer, just about everyone else is using Premiere, and it is the standard software in all classrooms. If the film major in your life is stuck using final cut or *shudder* iMovie, they’ll probably need to make the switch over eventually anyways, making this an excellent gift.

This is one of our favorite suggestions because, if you do a little sleuthing and find out your recipient’s student E-mail address, you can grant them access to the entire creative suite for the bargain price of $19.99. Typically a month of access to all the programs costs $49.99, so the savings are very impressive.

The creative suite features several other programs that are very beneficial to film students such as Adobe Illustrator and Photoshop. These tools can be used to create motion graphics, electronic press kits, movie posters, and tons of other media prevalent in the film industry.

The only thing greater than my love for teaching is my love for film. I made this site to help anyone getting started on their journey into the film industry or content creation. Enjoy!

Support Us On Social Media!